ON THE ORIGINS OF SELF-SERVICE 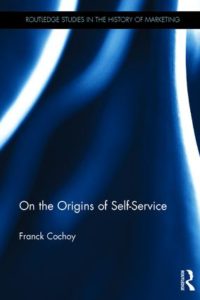 Most marketing scholars implicitly consider independent merchants as conservative and passive actors, and study the modernization of retailing via department stores, chains and supermarkets. In this innovative study, Franck Cochoy challenges this perspective and takes a close look at the transformation of commerce through the lens of Progressive Grocer, an American trade magazine launched in 1922.

Aimed at modernizing small independent grocery stores, Progressive Grocer sowed the seeds for modern self-service which spread in small retail outlets, sometimes well before the advent of the large retail spaces which are traditionally viewed as the origin of the self-service economy. The author illustrates how this publication had a highly influential role on what the trade considered to be best practice and shaped what was considered to be cutting edge. By displacing the consumer and their agency from the centre of analytic attention, this innovative book highlights the complex impact of social, technical and retailing environment factors that structure and delimit consumer freedom in the marketplace.

This detailed critical analysis of the origins of self-service will be of interest to a wide variety of scholars not only in marketing and consumer research, but also in business history, sociology and cultural studies.